The relationship between two measures,
expressed as the number of times one is bigger or smaller than the other. 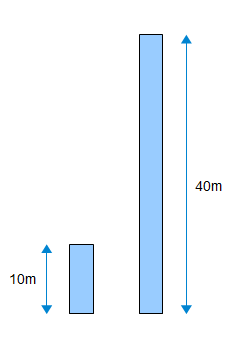 Consider the two bars above. One has a height of 10 meters the other 40 meters. The taller one is obviously four times taller than the other, so we say thier heights are in the ratio of four to one. What this means is that for every one unit of height on the left bar, the tall bar has four height units. Hence "four to one".

Ratios are usually written as two numbers separated by a colon:
the ratio of their heights is 4:1
The colon between the 4 and 1 is read as "to". So the sentence would be read as
"The ratio of the heights is four to one".
Obviously the taller one is first here. If you considered the smaller bar first then the ratio would be 1:4.

Using the bar example again, we ca also write the ratio as a fraction, where the top (numerator) is one height, and the bottom (denominator) is the other. We can pick either one to be the top, so using the smaller one, we can write: which reduces to

This fraction can then also be written as a decimal. In this case 0.25. This would be read as "the smaller bar is 0.25 times the height of the larger one"

Ratios have no units

A ratio is how many times bigger one thing is than another. It's a number you multiply by to get one thing from another. But remember, when you find the ratio of two quantities, they must be in the same units.

It's easy to get ratios backwards

If you know that John and Jim have weights in the ratio 1.2 : 1, there can be confusion about whom is the heavier of the two. By convention we assume that since John is mentioned first then his weight is the 1.2 in the ratio since that is also first. But you should be as explicit as you can. It is better to say John's weight is 1.2 times Jim's.

When the ratio is expressed as a fraction, the convention is that the first mentioned item is on top (numerator).

The bars above have heights in the ratio 4:1, but the difference in their height is 30 meters.