Definition: Objects are coplanar if they all lie in the same plane.
Pronounced "co-PLANE-are"

If you uncheck the 'coplanar' checkbox, the points are then randomly spread out in space and are therefore not coplanar*.

It's not just points that can be coplanar. Imagine some playing cards laying side by side on a tabletop, they are coplanar, because they both are in the same plane as each other.

* Each time you uncheck the box a different set of random points is produced. 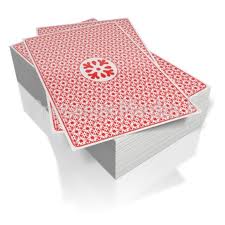 In the deck of cards on the right none of the cards are coplanar.

Each card is in a plane of its own, and although those planes are parallel to each other, that does not count as being in the same plane. So in the deck we have 52 separate (but parallel) planes with one card in each plane.

To make the cards coplanar, you would have to lay them all out on a table with no overlaps.

It only really applies to four points and up

This is similar to the idea that in two dimensions, two points are always collinear - you can always draw a line through any two points.

It's a similar idea to colinear

Recall that points are collinear if they all lie on a straight line. Coplanar is the 3D version of this, where they all lie in the same plane.